We want what we don’t have.

As a creator, I know this. My job is to make things that aren’t things yet, and I have a duty to champion imagination. I think we are exposed too early to the wonder of the world, however, and that’s why we’re unimpressed by it.

All those childhood books full of unicorns and dragons.

What if? we say, and then ignore all the extravagance around us.

Look at this horse!

But it doesn’t have a horn!

Well, we have deer and moose and other family Cervidae, all of which are arguably prettier than horses and have far more eccentric antlers than some dumb, twisted forehead tooth. Unicorns are dumb, kid.

No! One single ivory horn!

Okay, the narwhal.  It’s a unicorn, but also a fish! Are you not impressed with that?

Because they’re big and awe-inspiring and they fly.

How about the floppy eared thing with the arm on its face?!?! AND IT HAS TWO BIG IVORY THINGS! Is that not cool enough?  Or the beaver with the bird’s mouth and the eggs and the poison feet?  Are you not impressed with birds that can swim or with snakes that can fly?

No, you idiot. The floppy eared arm-face was boring until Disney made it fly.

If we had dragons and unicorns, kids wouldn’t give them a second look at the zoo.

Ugh, another Romanian Longhorn? This zoo is so ghetto. Jenny said she saw a Norwegian Ridgeback when her parents took her to Vail.

So I’m trying to live more aware of the really cool shit that’s already around me. For instance, I apparently have a cat. I didn’t want a cat. I don’t think anyone ever wants a cat. I think you just get one.

Damn, I left the door open. Now I own a cat.

As females in my life go, she checks a lot of boxes.  First of all, she doesn’t need me. She takes what I give her graciously; she doesn’t sit around waiting for me to make plans.  When I get home, she somehow always ambles to the porch, coming from wherever cats go.

She looks up at me with one wounded eye.

Not one that invokes pity – no, you’d never associate this creature with pity – but one that reminds you she’s been through shit before you.

She lets you know that she is there by choice, and I do the same.

I don’t even feed her every day. I don’t want to let her to become dependent on me, as I’m more likely to disappear than even she is.  She doesn’t care. Some days she’s eager for what I put out, and others she just kills a bird instead.

What, it’s just blood! Butch up, Sally.  I was in the mood for a little blue jay. Do you have some of that delicious tap water for me or am I gonna have to drink some more rain?

I just wish she had a horn or some wings.

How cool would that be? 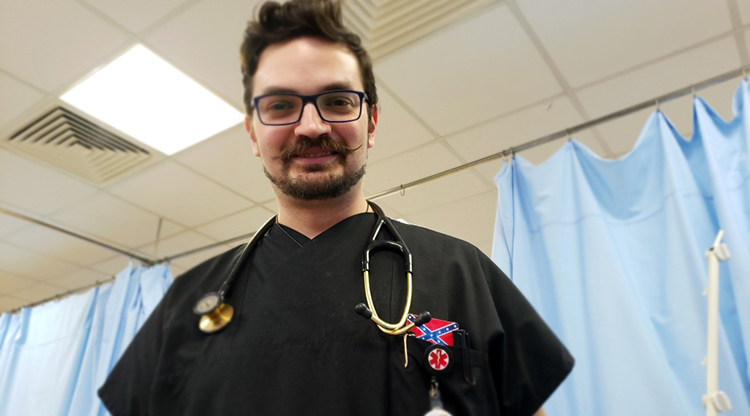 The Cost of Things